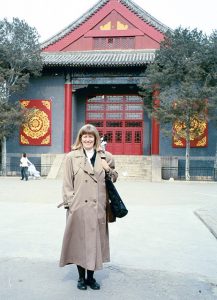 A native of Rehoboth, Massachusetts, Bonnie Pomfret sang entire songs before speaking in sentences.  She began piano studies at age seven and was an honors student in her local high school, participating in Field Hockey, Math Team, Music Club, and concert and marching bands (there was no choral program at that time).   After graduating from Interlochen Arts Academy, Bonnie spent two years as a liberal arts student at Clark University.   At the end of two years, Pomfret knew she wanted to be a music major and to study abroad, so she combined both by going to study at the renowned conservatory in Freiburg, Germany with a double major in voice and piano.  After a difficult first semester (when she found out her German wasn’t nearly so good as she thought!) the total experience was nonetheless so wonderful that Pomfret decided to stay and finish her degree in this charming corner of Germany, near the French and Swiss borders. Gradually her primary focus turned to singing.  During these three years she had many opportunities to perform, and she traveled extensively around Europe to perform and during vacations.   She was an avid concertgoer and with a group of friends traveled to nearby cities to hear concerts.  She returned to the U.S. at age 22 for a master’s degree in voice from the Boston Conservatory, where her studies with David Blair McClosky led her to pursue a minor in voice therapy and a practicum at Massachusetts Eye and Ear Infirmary.  During her last semester she taught at Wellesley College.   She was then awarded a Rotary International Fellowship and used the grant for a summer studying Italian in Florence, and then three semesters of  voice study at the University of the Arts in Berlin.  Her teachers there, Donald Grobe and Loren Driscoll, were members of the Deutsche Oper Berlin, and Pomfret spent several nights a week at the opera, receiving a thorough immersion into operatic literature and performance. Upon return, Pomfret taught voice for a year at Queens University in Charlotte, NC.  Then she completed a doctorate in vocal performance from Indiana University, where Bonnie was awarded an assistantship in music theory, took a minor in opera directing, and was involved both onstage and backstage with the Indiana University Opera Theater.   While working as an assistant director on Murder In The Cathedral, Ildebrando Pizzetti’s opera to T. S. Elliot’s text written for her teacher and mentor Nicola Rossi-Lemeni, she decided to study the songs of Pizzetti for her doctoral research.  After Rossi-Lemeni’s death Pomfret completed her degree as a student of Virginia Zeani, leading soprano of La Scala, Covent Garden, and the Metropolitan Opera.

While still a doctoral student, Pomfret was hired by Illinois State University, where she taught voice, and produced and directed operas and musicals, including Cosi fan tutte, The Consul, The Merry Widow, Gianni Schicchi, The Impresario, The Old Maid and the Thief, A little Night Music, Sweeney Todd, The Sound of Music, and the Pirates of Penzance.  She married her colleague, violist Arthur Lewis, in 1987, and their wedding trip to Italy was also a research trip to find Pizzetti materials.  Drinking wine in an art-filled apartment in Rome with Pizzetti’s son Bruno was one of many highlights!  Completing her doctorate in 1991, she was associate professor at Illinois State from 1992.  She was a 1994 National Endowment for the Humanities Fellow at the Wagner-Festival in Bayreuth, Germany, and New York University, researching staging techniques in Wagner’s Ring cycle. During this period she also served as singing voice specialist at Peorie ENT Group, one of the early centers devoted to a team approach to voice, and sang extensively in recital and oratorio, mostly in the Midwest.  Her daughter was born in 1996, a delightful surprise after being told no children were possible. 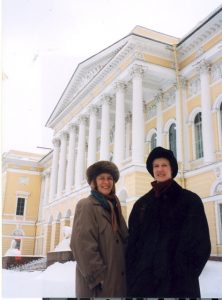 Pomfret was hired as director of vocal studies at Emory University in 1997, maintaining a private studio of advanced singers and for two years serving as Singing Voice Specialist at the Emory Voice Center at Crawford Long Hospital. During this period Bonnie taught voice, diction, and opera workshop, and performed all over the United States as well as in Austria, China, Finland, France, Germany, Hungary, Italy, Russia, and Spain.  Artist residencies in Beijing and St. Petersburg were particular highlights.  For the 2003 opening of Emory’s new concert hall, POmfret commissioned Libby Larsen to set a group of songs to texts by Sor Juana della Cruz, a 17th century Mexican poet.  This led to a compact disc featuring the cycle and a number of songs composed by other American women, including Margaret Bonds, Gabriela Frank, Louise Talma, and Augusta Reed Thomas.

Between 1994 and 2008 Pomfret devoted considerable energy to the McClosky Institute, a non-profit with the expressed purpose of preserving the voice techniques developed by David Blair McClosky.  She was instrumental in developing its curriculum of in-service courses for choral and voice teachers, and taught over 35 summer  seminars and 5 certification courses, and served three terms as President and one as Secretary of the organization.  She also wrote two chapters for the updated version of McClosky’s book, Your Voice at Its Best (Waveland Press, 2011.)

In 2004-2006, Pomfret taught at Shorter College in Rome, GA and in 2006-7 she was Interim Director of Opera at the University of Alabama at Birmingham.   After a divorce Pomfret felt a pull to her native New England, and she relocated to Massachusetts.  She taught at Salve Regina University, the Music School of the RI Philharmonic, South Shore Conservatory, and privately.

In 2010 she moved to the Boston suburbs and taught at Boston University,  at Milton Academy.  She maintains a studio in Wayland MA and  is a member of NATS, NATS-Boston Chapter, College Music Society, Pi Kappa Lambda, and the McClosky Institute. She is in demand as a teacher, performer, clinician, and presenter.