The role of the vowel in voice training

In singing, vowels are important because we extend the vowels In order to create a vocal line.  Consonants are not generally sustained or extended.  This is why singers vocalize primarily on vowels.

What is a vowel, and why is one vowel “better” than another?

A vowel is a particular configuration of the tongue, jaw, and lips that produces certain areas of resonance, you could think of them as overtones,  when air passes through.  There is rather universal agreement about the resonance which makes vowels recognizable.  (See  illustration from Richard Miller, The Structure of Singing). 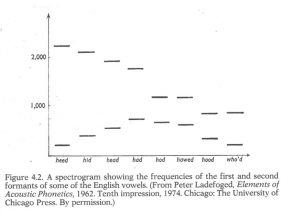 Try whispering the vowels without the voice.  Even without pitch, the vowel can be clearly recognized. In singing, we must combine these vowel configurations with sung tone to create understandable, projected, and beautiful sounds.

What can voice teachers do to train singers to sing ALL vowels better?

Each vowel has a particular position for the articulators.  Let us focus on the position of the tongue.  To me, the most important part of good vowel pronunciation is freedom for the tongue to move.  Miller shows us a graphic with tongue positions for the different vowels.   (See  illustration from Richard Miller, The Structure of Singing). 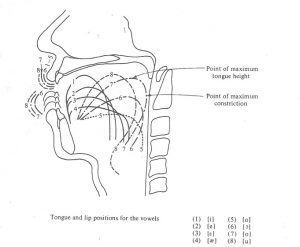 Remember that the primary function of the tongue is to aid in swallowing; it is a strong muscle.  Many of us have unconscious tensions in the tongue which can make it more difficult to achieve the configuration needed to make a particular vowel.  To add to the challenge, we do not have great sensory feedback except at the front part of the tongue.  To address these, I suggest two exercises:

Next, it is wise to practice extended vowel sounds in a soft speaking tone.  Speaking patterns almost always carry over to singing, and it may be easier to identify these patterns in speech.  For example, can the student say an extended “ah” without pulling the tongue back?  Can the student do this while keeping the area under the chin soft?  This area should not tighten to initiate or continue the vowel.  If this seems impossible, I would look to the coordination of breath.  The breath stream should be smooth, and onset must be coordinated, to avoid undue tongue tension. All vowels should be formed in this manner.

Next it is time to sing each vowel on a lower-to-mid-range note.  Take it easy!  If you can keep the area under the chin relaxed, you are allowing the vowel to be clear and the tone to be resonant. .  If things are not relaxed, stop, do the exercises in a. above and try again.  As you progress, you can extend the range and the dynamic level.

The position of jaw and lips must be flexible enough to allow vowel clarity  yet consistent enough for a beautiful tone and line.  This is a balancing act, but easy to accomplish once the articulators are relatively free.  Moriarty, in his book Diction, shows another type of graph which includes jaw and lip configurations for vowels in the primary languages of singing.  (See graphic). 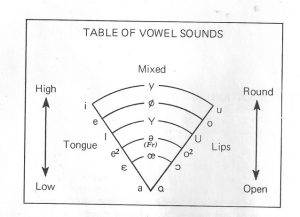 This is included for the voice teacher.  The student may want to create the vowel sounds and compare the sensation of where their own articulators are.  Often in less experienced singers, the lips are lazy.  I suggest a moderate mouth opening for all the vowels to start.  Start with a moderate mp  volume and a single note.  Work through middle range on all vowels

There are some acoustic issues in singing very high notes. Above G at the top of the treble clef, pure vowels are acoustically impossible, because the basic note is at a higher rate of vibration than the overtones necessary to produce the vowel.  There are several approaches to this issue, but these will be discussed in a later post about registration.